A tribute to my father on Memorial Day

On the left is a photo of my Dad, Leonard J. Kohnke. I’m guessing it’s from about 1941 or 1942 when he was enlisted in the army during World War II. On the right is my portrait of my Dad. I love him very much, miss him terribly and am so proud of him. Today in particular, I want to pay tribute to him and all those before and after him who served our country.

My dad, Leonard J. Kohnke, was a wonderful man. He grew up in Chicago, one of 5 children. And, when World War II began, he enlisted in the army. Dad served four years overseas in the Battle of the Bulge, Kasserine Pass, in Morocco, Italy, England, played a part in liberating a concentration camp and was part of the 634th anti-aircraft artillery automatic weapons battalion “cited for outstanding performance of duty against the enemy from 16-21 December 1944. During the violent enemy counteroffensive near ST VITH, BELGIUM . . .” The quote is from a letter Dad received dated July 18, 1945. Here’s the entire letter:

The next time you’re in Lincoln Park, across from the Biograph Theater, visit the Red Lion Pub. Colin, the owner, has renovated his father’s original Red Lion, creating an homage to soldiers who served in World War I and World War II (and all things British). It’s an amazing place with fabulous food and the best of spirits and beers. The owner pays tribute to his father who served in World War I and II. I’m forever grateful to Colin for making a space for my Dad amidst the other soldiers. My Dad’s story is to the left of the bar. 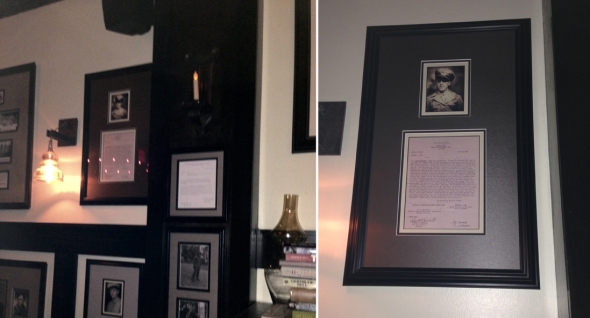 I love you, Dad . . . you are truly one of the greatest generation.